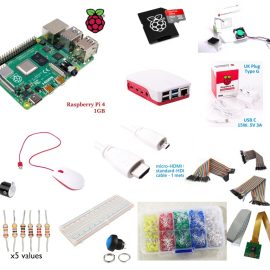 What is the Raspberry Pi Single Board Computer?

The Raspberry Pi is a series of small single-board computers developed by the Raspberry Pi Foundation in the UK to promote the teaching of basic computer science in schools and in developing countries. The original model became far more popular than anticipated, getting outside its target market for uses such as automation, multimedia, robotics, IoT and now even in IR4.0.

The board itself does not include peripherals (such as keyboards and mouse) or cases. However, there are many accessories to have been included in several official and unofficial bundles, making it highly customizable. Generally, the Raspberry Pi board comes with CPU, GPU, RAM, HDMI multimedia port, USB ports, wireless or wired connectivity, Camera interface, microSD card slot, and General Purpose Input/Output Pins. There are millions of Raspberry Pi boards in universities, polytechnics, schools, factories, maker spaces, and even the space station. The faster 1.5GHz 64-bit quad-core CPU on the Raspberry Pi 4’s Cortex A72 SoC, coupled with the up to 4GB LPDDR4 RAM gives performance comparable to entry-level x86 desktop PCs. You’ll see significantly faster boot speeds, and much better performance for CPU-heavy tasks like emulation and media center usage; much snappier all round! We have been using this single board computer as daily online web-based work including accessing emails, Google Drive, and playing YouTube videos via the Chromium browser. We like it!

The true gigabit ethernet on the Raspberry Pi 4, designed for super-speedy wired networking while retaining the Power-over-Ethernet capability (requires additional Raspberry Pi PoE HAT), making it perfect as a media server and network-related projects. We manage to get 940 Mbits/s through Iperf3 on Raspberry Pi 4 Model B’s Ethernet port. With the Video VI GPU, Raspberry Pi 4 Model B is capable of supporting 4Kp60 multimedia. You can use much larger displays with crisp, sharp, high resolution. Use the H.265 4Kp60 hardware decoding to watch 4K movies in your favorite media center distro.

For the first time, you’ll be able to use dual HDMI displays with the Raspberry Pi. This is great for working on a bunch of different tasks at the same time without having to work in tiny windows.

Alongside the major upgrades, Raspberry Pi 4 Model B still keeps backward compatibility on the 40-pin GPIO. So generally, all of the HATs (Hardware Attach on Top) are still compatible with this powerful board. However there are also some upgrades on the 40-pin header, the new Raspberry Pi has support for an additional 4× UART, 4× SPI, and 4× I2C connectors. Of course, it is still compatible with Cytron’s Maker pHAT 🙂

With the USB-C socket for Input power, Raspberry Pi 4 Model B is able to get more power (preferred 15W or higher) and deliver higher power for its peripherals such as USB 3.0, e.g.: HDD and SSD Hard Disk. With that, you will need the Power Adapter with USB-C cable, and of course, we have it. Grab the UK plug which is the official power adapter from Raspberry Pi Foundation.